No-purge and passive sampling methods eliminate the pre-purging step for groundwater sample collection and represent alternatives to conventional sampling methods that rely on low-flow purging of a well prior to collection. These methods tend to be more efficient than conventional sampling methods, hence representing a possible lower-cost alternative. Common types of no-purge/passive sampling methods include grab samplers, equilibrium (or diffusion) samplers, and sorptive samplers[1]. Performance studies show little-to-no bias in the average results obtained using no-purge and passive sampling relative to low-flow sampling results. These methods have also been validated for several different types of compounds (primarily volatile organics)[2]. However, there can be a consistent difference in the results obtained using low-flow vs. no-purge sampling methods for some individual monitoring wells[3]. Low-flow purging tends to produce flow-weighted average concentrations while results from passive samplers may reflect depth-discrete concentrations, but this can be influenced by factors such as in-well mixing.

No-purge and passive sampling refer to several “non-traditional” methods for collecting groundwater samples from a monitoring well for the purposes of site characterization or long-term monitoring. In some cases, the terms are applied to the physical devices used to collect the samples (e.g., passive samplers). These methods are an alternative to traditional sampling which involves purging and disposal of groundwater from a well prior to collecting the sample for analysis. No-purge and passive sampling methods eliminate the purging step from the sample collection process.

There are a variety of sampling methods that can be considered no-purge or passive. A common feature is that all involve the collection of groundwater from a discrete portion of the screened interval of a well. Here are some examples: 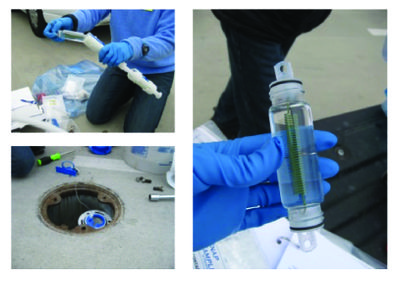 Figure 1. The Snap SamplerTM is an example of a passive grab sampler. The system consists of vials that can be installed singly or in series (top left) and then triggered from the ground surface (bottom left) when the sample is ready to be collected. The grab sample can then be sent for analysis with minimal preparation (right). 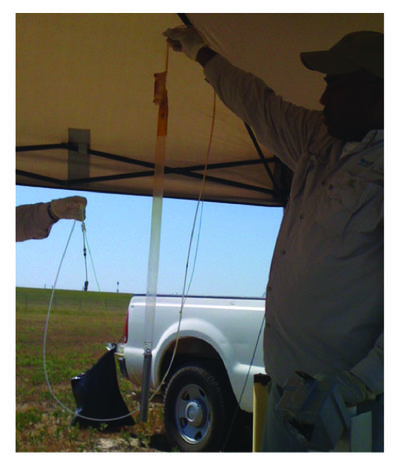 Figure 2. Passive diffusion bags are a common type of equilibrium sampler. The water-filled bag is installed in the monitoring well and then retrieved after the contaminant concentrations in the well and the sampler achieve equilibrium. Groundwater samples are then transferred from the bag to method-appropriate containers for analysis.

However, there are other reasons why a groundwater sample collected using a no-purge/passive method could be different than a sample collected using low-flow purging. For example, mixing may occur infrequently in some monitoring wells, such that the passive sampler is collecting more of a depth-discrete sample relative to a low-flow sample, which is typically assumed to represent a flow-weighted average across the screened interval (i.e., higher permeability zones contribute more flow). Furthermore, research demonstrates that concentrations can fluctuate widely during pumping based on the location of the pump intake relative to higher concentration sub-intervals within the screened interval[7]. In other words, there may be a transient period before the flow-weighted average is obtained, which could contribute to differences between a low-flow sample and a sample collected using passive methods.

Sampling device installation far in advance of sample collection is a main difference between passive sampling methods and traditional sampling methods. Passive samplers are frequently weighted to overcome buoyancy, and then lowered into the well until they reach the desired depth within the screened interval. The line used to lower the sampler is then secured to the well head or other fixed surface point. The sampler is retrieved following a pre-specified period of deployment that corresponds to either the time required for equilibrium to occur (i.e., equilibrium samplers) or the time between monitoring events. Transfer to a different sampling container (e.g., 40-mL VOA vial) may be necessary for some samplers (e.g., passive diffusion bags). In many cases, the sampler for the next monitoring event is installed when the sampler for the current monitoring event is complete. This procedure eliminates the need for an extra trip and causes mobilization requirements to be comparable to conventional sampling.

Passive samplers and other no-purge methods are typically adopted to reduce costs associated with long-term monitoring. Primary drivers for cost savings are: 1) reduction in labor hours associated with collecting the sample and 2) elimination of costs associated with handling and disposal of purge water. Cost savings will vary depending on the type of sampling method and the scope of the sampling program, but reductions of 10-70% relative to low-flow purging have been reported in demonstration studies[1]. 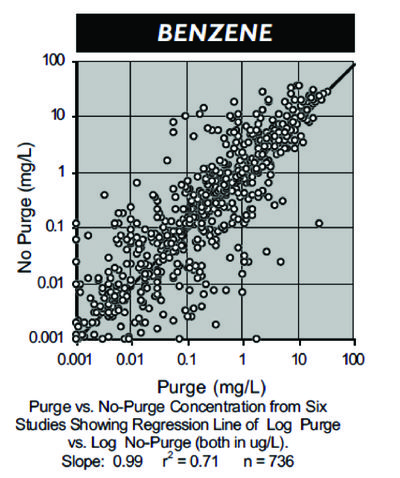 “No-purge sampling methodology will not affect the overall variability in chemical data, and will provide a comparable, and in many cases more conservative estimate of petroleum hydrocarbons in groundwater.” (Study 2, Western States Petroleum Association)

“Clearly, if one were to estimate the location of the contaminant plume, or the magnitude of the BTEX concentration at any specific point there would not be a significant difference if these estimates were based upon the pre-purge rather than the post-purge values.” (Study 5, University of Massachusetts: Dartmouth Study)

“…the practice of purging prior to sampling for testing does not appear to have strong justification in the environmental situations that are represented at least by the standard wells.” (Study 6, BP Amoco: Maryland Study)

Figure 3 shows a comparison of purge vs. no-purge data from these six studies.

There have been recent efforts aimed at examining and/or validating the use of various types of passive samplers for groundwater monitoring. These include the following:

Passive sampling methods, and passive diffusion bags in particular, have widespread regulatory support for long-term monitoring purposes and can rely on extensive published guidance [4]. However, for any site that is considering adopting these methods, a site-specific validation study may be valuable or even required for regulatory approval.

At most sites, no-purge/passive groundwater sampling data are comparable to monitoring data from conventional purge-based sampling methods. The most appropriate method should be selected based on considerations of implementability and cost. Many no-purge methods show little or no bias compared to low flow methods compared over many samples over many wells. However, for an individual monitoring well, changing the sample method may result in an increase or a decrease in measured contaminant concentration. Therefore, the effect of changing sampling methods should be considered with evaluating any long-term concentration trend.