Many active remedies are effective at treating higher concentrations of contaminants, but as the contaminant concentrations decrease, the rate of cleanup may slow until it is not significantly different from the rate of cleanup provided by the natural attenuation processes that occur at the site. The United States Environmental Protection Agency (USEPA 1999) [4] [1]allows the use of monitored natural attenuation (MNA) to attain the cleanup goals when the site-specific remediation objectives can be attained within a time frame that is reasonable compared to that offered by other more active methods. Many CERCLA[5] and RCRA[6] sites take advantage of this policy. An active remedy is typically used initially to treat high concentrations of contaminants followed by MNA to treat the lower concentrations that remain.

Unfortunately, there is no well-established approach to determine when it is appropriate to discontinue the active remedy. This article reviews available tools and approaches to evaluate a transition to MNA. The tools and approaches depend on calculations of rate constants for natural attenuation with distance in flowing groundwater or rate constants for attenuation over time in individual monitoring wells. The next section provides some background on first-order constants and how they are extracted from monitoring data.

A general formula to describe the rate of a chemical reaction is: 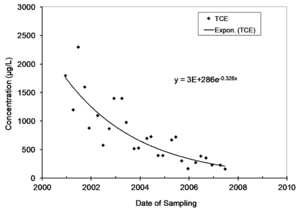 Figure 1. Attenuation of Trichloroethene (TCE) over time in a monitoring well at a site in Michigan. The concentration vs. time rate constant is 0.326 per year and largely represents the rate of the attenuation of the source of contaminants in the aquifer.

The first-order rate constant for attenuation over time in a well is commonly referred to as kpoint[1]. A chart in Microsoft EXCEL of concentration on date of sampling can be used to extract a value for kpoint. Select the data, and then insert an exponential trend line and display the equation on the chart. The value of kpoint can also be calculated in EXCEL using the Regression Analysis Tool in the Data Analysis Toolpak. Note that the rate constants extracted in EXCEL are constants for the rate of change, not the rate of attenuation. Take the negative of the rate of change to get kpoint. In the example in Figure 1, the units of time on the X axis is years, and the value of kpoint is 0.326 per year.

Attenuation versus distance rate coefficients describe a bulk attenuation rate of both degradation and dispersion processes. To extract values for rate constants for degradation alone, it is necessary to calibrate a groundwater flow and transport model to the data at the site. The model is calibrated with values for the hydrogeological properties of the aquifer (effective porosity, hydraulic gradient, hydraulic conductivity, hydrodynamic dispersion and the organic carbon content of the aquifer matrix). After the hydrogeological properties of the aquifer are fixed in the model, the most appropriate values for the degradation rate constants are the values that produce the best fit between the contaminant concentrations that are predicted by the model and the contaminant monitoring data at the site.

There are a number of reasons why natural attenuation processes are better described as first-order relationship instead of zero-order or some other order. The attenuation over time in a monitoring well tracks the attenuation over time of the source of contamination that sustains the plume[1]. Sites go through a lifecycle, and attenuation of sources at mature sites is often a first-order process[7]. If a chlorinated solvent site is mature, the contamination in the source area that was originally present as nonaqueous phase liquids (NAPL) has been redistributed and is now sequestered in a sorbed phase to aquifer solids or has diffused into non-transmissive portions of the aquifer matrix . Transfer of contaminants back into the more transmissive portions of the aquifer occurs by diffusion along a fixed path length, and the rate of transfer is controlled by the concentration of the contaminant remaining in the source material. Because the rate of transfer is proportional to the concentration of contaminant in the source material, attenuation of the source is a first-order process. These processes are discussed in more detail in Source Zone Modeling.

Goals for MNA at Sites

The information necessary to evaluate whether a site can be transitioned to MNA depends on the goal for MNA at the site. For many cleanup actions, the goal is to confine contamination within a waste management area where the contamination is left in place, in which case the cleanup goal applies to point-of-compliance wells that are outside the waste management area. For other cleanup actions, the entire site must be cleaned up, in which case the cleanup goal applies to any monitoring well on the site. The time by which the goal is to be attained is specified at CERCLA sites in the Record of Decision (the ROD). At RCRA sites, the time allowed for the cleanup to be attained may be specified in the permit.

When the Goal Applies to Point-of-Compliance Wells

Consider the following framework for evaluating a transition to MNA:

There are two computer applications that are particularly useful to extract rate constants at a site from monitoring data that were collected before the active remedy was installed. Natural Attenuation Software (NAS)[2] and BIOCHLOR[3] can both be downloaded from the internet at no cost.

Figure 2 provides an example calibration of NAS. The concentrations in the monitoring wells used to calibrate the model are compared to the simulation provided by the model. The values of the rate constants that are extracted from the field data are available in the “Output” tab under “Data and Results Table.” 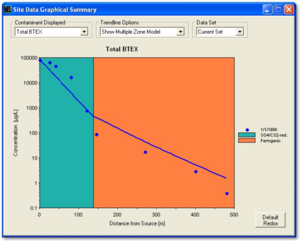 Figure 2. Example calibration of NAS to natural attenuation of total BTEX at a site (Figure 17 of NAS User’s Manual).

Figure 3 depicts the input screen for BIOCHLOR. The user inputs the hydrogeological parameters, the first-order rate constants (1st Order Decay Coefficient), the distribution of the wells along the flow path, and the concentrations of contaminants in the wells. The model is set up for conditions that apply before the installation of the active remedy. 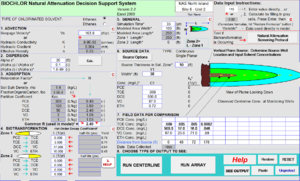 Figure 3. The data input screen for BIOCHLOR before remediation with cis-1,2-Dichloroethene (DCE) and vinyl chloride (VC) source concentrations of 500 and 87 mg/L respectively at the source when the release first occurred.

BIOCHLOR does not automatically fit the rate constants to the field data. Instead, the user examines the output of the model, and adjusts the rate constants until they provide the best fit between the model prediction and the monitoring data for wells at the site. This comparison is illustrated in Figure 4. 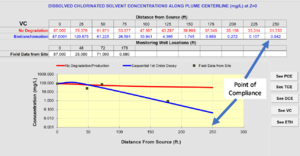 Figure 4. Output of the RUN CENTERLINE simulation in BIOCHLOR comparing the fit between the simulation and the field data for vinyl chloride before an active remedy was implemented