Bioremediation is the process by which contaminants in soil and/or groundwater are treated biologically, primarily by microorganisms or biomolecules generated and released by the cells. This article overviews key design considerations when planning and implementing a bioremediation remedy. This article focuses on enhanced in situ bioremediation (EISB) for the anaerobic biodegradation of organic contaminants, particularly chlorinated solvents, in soil and groundwater. However, much of the information provided is applicable to other contaminant types. There are numerous resources for design and implementation of bioremediation applications as well as detailed case studies and performance evaluations. This article provides a summary of key design considerations and parameters for anaerobic biodegradation for treatment of common organic contaminants.

Key considerations for designing in situ anaerobic bioremediation applications include the conceptual site model (CSM) and remedial goals, which determine the remedial configuration, amendment types and dosage, longevity of amendments, and modes of delivery. Often, additional site characterization, laboratory microcosm studies, or small-scale field tests are necessary to evaluate the technology and support of the full-scale remedy.

Successful implementation of anaerobic bioremediation must consider the CSM to develop a robust site-specific design. A CSM is developed and refined during site investigation activities to describe the site conditions, contaminant sources and extent, and the risk they pose to receptors. The following components of a CSM are evaluated to develop the optimal remedial design: 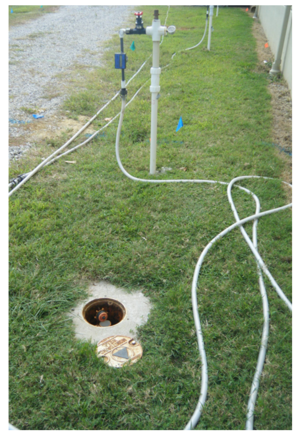 The remedial goals and contaminant distribution are key to defining the target treatment area and remedial configuration. The contaminant type, biogeochemistry, and hydrogeology (aquifer permeability) determines the amendment type and optimal dosage. The site infrastructure and hydrogeology also determine the delivery method, including spacing between injection points, volumes of injectate, and injection frequency.

In-situ anaerobic bioremediation of contaminated soil and groundwater involves introducing amendments and microbial cultures, if bioaugmentation is used, into the saturated treatment zone. The two most common treatment configurations include:

The configuration is selected based on the remedial objectives, remedial timeframe, and site conditions and restrictions.

Amendments can be delivered into the subsurface using injection wells (e.g. batch injection, recirculation, push-pull), direct injections (e.g., direct push technology, hydraulic and pneumatic fracturing) or excavation and backfill. Only liquid amendments (quick release or slow release) can be emplaced through well screens. Direct injections can be used for delivery of all liquid amendments as wells as microscale-particulates (e.g., EHC®, ABC+®, which contain zero valent iron and solid phase carbon), while biobarriers containing mulch or compost are installed using trenches. The design spacing of direct injection points or wells are based on the estimated radius of influence, which is dependent on the site-specific geology and amendment characteristics.

Amendments can be applied in a passive or active manner to target the contaminant zones.

Amendments for anaerobic bioremediation include carbon-based electron donors, electron acceptors, nutrients, pH buffers, and microbial cultures. For each type of amendment that is used the critical design considerations in selection include the contaminant type, site geochemical/hydrogeological conditions, and delivery configuration/mode, as well as the amendment solubility, anticipated rate of consumption (or growth in the case of bioaugmentation), longevity, cost, and ability to be distributed in the subsurface. Bench scale testing may be used to confirm the most applicable amendment type and dose.

Electron acceptors such as nitrate, iron(III), or sulfate can be used as amendments for the anaerobic oxidative bioremediation of contaminants such as aromatic hydrocarbons, fuels, and some chloroethenes[3][4][5][6]. While these electron acceptors may promote slower kinetics compared to using oxygen, they may be chosen due to higher solubility, ease of delivery, and/or compatibility with existing geochemical conditions. Other considerations when using these electron acceptors include:

Under natural conditions, typical aquifers typically contain suitable amounts of trace nutrients for microbial growth, however substrate amendments may be used to provide additional nutrients such as nitrogen, phosphorous, sulfur, vitamin B12 and yeast extracts. While these nutrients may be valuable at some sites, there can be disadvantages to using nutrients, particularly at high levels, as the nutrients may precipitate with natural minerals and cause aquifer plugging. Nutrients may also compete for electron donors, when used. Additionally, nutrients such as vitamin B12 can be expensive to apply, and the cost-benefit of these additional amendments must be considered in the design process.

The activity of the microorganisms that degrade the target compounds, and in particular the chlorinated volatile organic compound (cVOC)-dechlorinating microorganisms, can be inhibited at low pH (less than 6.0)[7]. Low groundwater pH can be a result of the geologic materials, contaminant impacts (i.e. acids), or can occur during EISB due to the fermentation of electron donors and/or dehalogenation of cVOCs. The addition of a 'buffer' (i.e., sodium bicarbonate, calcium carbonate) or base (i.e., magnesium hydroxide) may be required for some EISB applications, to neutralize pre-existing acidic groundwater conditions or to maintain pH > 6.0 during EISB. When buffering is required for an anaerobic bioremediation application it is critical to complete bench scale tests with both groundwater and aquifer solids to confirm the buffer capacity of the site materials.

Adding microbial cultures for bioaugmentation may be considered at a site when an appropriate population of anaerobic microorganisms is not present or sufficiently active to stimulate complete anaerobic degradation of the existing contaminants. For example, the presence of Dehalococcoides-related microorganisms has been linked to complete dechlorination of PCE and TCE to ethene in the field[8][9][10][11]. Commercially available bioaugmentation products that contain these microorganisms include KB-1®, SDC-9™, and Bio-Dechlor Inoculum® Plus.

Once the amendments for an application are selected, the quantity, concentration and frequency of amendment addition can be evaluated. To define the amendment dose, the site conditions are reviewed in terms of remedial objectives (i.e., treatment targets, longevity) to obtain the basis of dosing calculations including dimensions of the targeted subsurface zone and associated pore volume, groundwater velocity, concentrations of terminal electron acceptors (for electron donors), the type of contaminants and geochemical characteristics (e.g., initial redox state, pH). Although conservative designs are typically applied, the potential for producing methane gas or other gases (i.e. hydrogen sulfide) must also be considered, especially in shallow aquifers. As described above, the results from bench scale testing may be used to support this evaluation.

In the case of electron donors, dosing is based on “electron donor demand” which accounts for consumption of the amendment by treating the target constituent(s) as well as competing electron acceptors. An on-line Planning Aqueous Amendment Injection Systems Soluble Substrate Design Tool is available from ESTCP for estimating electron donor demand[12], and electron donor vendors may also have design tools to support EISB applications. These calculations can also be used to evaluate the need for and frequency of repeat injection events, which will then be confirmed based on performance monitoring. However, it is important to note that previous applications have shown that the treatment period may be extended beyond the longevity of the amended electron donor as a result of endogenic cell decay of biomass. Thus, the initial biomass growth stimulated by electron donor addition may serve as a secondary source of electron donor[13].

Potential for adverse effects from amendments and/or their by-products (i.e., methane in soil gas, hydrogen sulfide, metals mobilization) is also evaluated on a site-specific basis. The monitoring plan should be adaptive to accommodate observed changes in groundwater quality at the site. Performance thresholds or triggers should be used to evaluate the performance monitoring results and identify when additional remedial contingencies may be needed to achieve the remedial objectives and/or when the remedy is complete.

There have been numerous field demonstrations of anaerobic bioremediation documented in publicly available literature and reports, including:

The design of a successful anaerobic bioremediation application depends on a strong understanding of the CSM and remedial goals for the site. Bioremediation can be adapted to work in a wide range of site conditions, and the amendment selection and delivery methods are designed to be effective for the site-specific hydrogeologic conditions, contaminants, biogeochemistry, and infrastructure constraints to satisfy the remedial goals.